biochemist, mRNA researcher, and behind the scenes hero of COVID-19 vaccine development 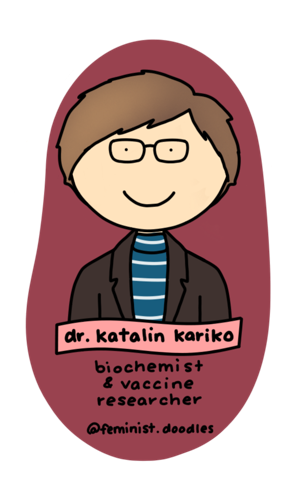 Who is Dr. Katalin Kariko?

Dr. Katalin “Kati” Kariko is a biochemist who has emerged as one of the heroes of the COVID-19 vaccine development. Her decades of research on mRNA laid the foundation for the development of both the Pfizer and Moderna vaccines.

Dr. Kariko’s research at the University of Pennsylvania focuses on messenger RNA, or mRNA, which is a molecule that is essentially the blueprint that your cells use to make proteins. Her hypothesis was that mRNA could be used to teach cells to create their own medicines, and she has been laser-focused on the development of this idea throughout her career.

Kati’s theories about mRNA were seen as unorthodox, and she struggled to get funding to continue her research through grants due to the lack of precedent for her work. Originally from Hungary, she earned a PhD at the University of Szeged and worked there as a postdoctoral researcher until the university’s research program ran out of money in 1985. She left the country with her husband and 2-year-old daughter with ￡900 to start a position at Temple University in Philadelphia to continue her research.

A few years later, she became a research assistant professor at the University of Pennsylvania, in a lab with Dr. Elliot Barnathan, a cardiologist. Their first experiments involving mRNA proved successful and opened a world of possibilities of what could be done with mRNA technology - until Dr. Barnathan left the university to pursue a position at a biotech firm, leaving Kati without a lab.

Dr. Kariko bounced around to several other labs looking for a home for her research. She continued to write grants, though most were rejected. Leading scientific journals rejected her work as well, and when it was finally published, it received little attention.

After years of pitching her ideas about using mRNA to create vaccines to pharmaceutical companies and venture capitalists to no avail, two biotech companies eventually took notice of their important work: Moderna and BioNTech (maybe you know them).

Clinical trials for an mRNA flu vaccine were underway when COVID hit, which allowed researchers to quickly pivot once the information from the virus became available. The idea for the Pfizer and Moderna vaccines was to introduce mRNA into the body that would essentially tell cells to produce the coronavirus’s protein, which would teach the body to identify it and attack it should it ever re-enter the body. Because of Dr. Kariko’s existing research in mRNA, Moderna designed its vaccine in a matter of days. BioNTech designed theirs in hours.

Testing then began for the vaccine, which requires months of trials. When the first results of the study came back, they showed that the mRNA vaccine was highly effective against COVID - to which Dr. Kariko replied, “Oh, it works. I thought so.”

At 66 years old, Dr. Kariko has dedicated decades to her research on mRNA, tirelessly seeking funding and buy-in from the biochemical community. After being unable to secure grants or get published in journals, it is now being speculated that she is being considered for the Nobel Prize in Science.

On December 18, 2020, Kati Kariko received the vaccine that her perseverence made possible. 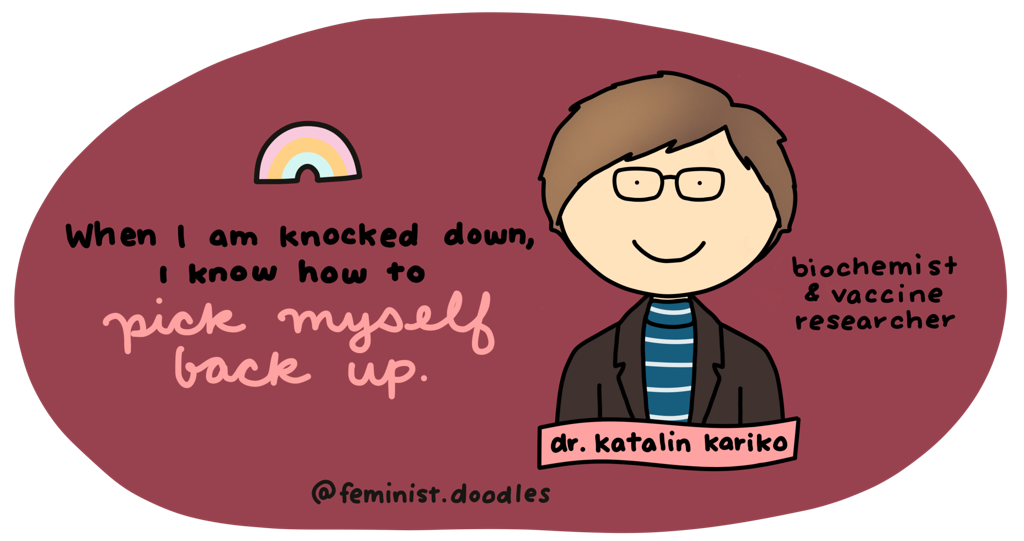 Meet a brand new woman in history or politics every week - delivered straight to your inbox! For girl power enthusiasts of all ages. personal development and mindset books that are not by Rachel Hollis, aka: Girl, Get New Books! April 15,2020 Share: Perhaps... On Tuesday, March 16, 6 Asian women in Atlanta were murdered at their workplaces, which were Asian-owned spas. The murderer...